View source
watch 01:36
We're Getting Mutants in the MCU - The Loop
Do you like this video?
Play Sound

Ochanomizu is a short, portly man in his mid-60s. His most iconic features are his large nose, and his receding curly white hair that frames the sides of his face. He is most commonly seen dressed in laboratory attire or in formal clothing like suits and polo shirts.

When he was younger, Ochanomizu had a full head of black curly hair. In Atom: The Beginning, where he is 26 years old, he is much taller and skinnier than previous younger versions of himself.

Hiroshi Ochanomizu is an intelligent, caring man who is passionate about science. Though he is the current Minister of Science, he is tremendously humble. Ochanomizu strongly believes in robot rights and justice. He has often used his influence as the Minister of Science to speak out about certain causes. He's tremendously emotional and passionate, but also equally intelligent and clever.

Ever since his youth, Ochanomizu loved science and engineering. When he was in graduate school, he was roommates and lab partners with Umataro Tenma. Their long-but-former friendship is what makes Ochanomizu want to reform and still believe in Tenma. As much as Ochanomizu cares about his former colleague, he will not hesitate to call out Tenma for being abusive or reckless.

Not much is shown in canon about Ochanomizu's younger years. In the manga chapter "Once Upon A Time," it is shown that Professor Ochanomizu was interested in robotics since his youth. A time-traveling Astro Boy accidentally ended up trapped in 1963 and became Ochanomizu's assistant for a few months, until Astro ran out of energy. In Little Astro Boy, a younger Ochanomizu is shown in a flashback, where he is working on a rocket.

In Atom: The Beginning, it is shown that Professor Ochanomizu was close friends with Dr. Tenma. They worked together in a private independent laboratory, nicknamed Lab 7. The two created and raised an AI robot named A106, nicknamed "Six".

Professor Ochanomizu appears in some form in every Astro Boy series incarnation. He also appears in different roles through the Osamu Tezuka Star System.

There are several constants in Ochanomizu's role in the Astro Boy series canon. He is always introduced early on, and helps intercept Astro from abandonment or enslavement. In the 1963 series, 1980 series, and American comic series, Ochanomizu finds Astro trapped at Hamegg's circus and soon rescues him.

In most series, Ochanomizu builds a robotic family unit for Astro, whom Astro live with while Ochanomizu stands by as Astro's mentor. However, in a few series, Ochanomizu has adopted Astro and Uran and lives with them as a father. This includes the 2003 series and the Pocket Jeunesse book series.

Prof. Ochanomizu has become the new Minister of Science after Dr. Tenma's ill-fated cruise ship tour. Ochanomizu and a colleague go to a robot circus in America, but Ochanomizu is shocked to see Tenma's robot son in the circus. With Kathy's help, Ochanomizu is able to break Astro out of the circus and bring him back to Japan.

The 2003 series opens with Ochanomizu, the new Minister of Science, reactivating Astro. He begins to raise Astro at his own home and puts him through elementary school. Dr. Tenma begins to feud with Ochanomizu over which one of them is Astro's true father. Ochanomizu is assisted at the Ministry of Science by his protoge Yuko Kisaragi, and her robot assistant Momo. As well, Ochanomizu adopts a gifted orphan named Reno in order to rescue him from a travelling circus.

In the 2009 film, Ochanomizu's role is scaled back. Ochanomizu discovers two energy elements that he isolated from a meteorite: the blue energy core made of postive energy, and the red energy core with negative energy readings.

As Dr. Tenma's closest colleague, Ochanomizu assists in Toby Tenma's rebirth. He also provides the blue core as Astro's power system. Ochanomizu provides the voice of reason at the Ministry of Science. He tries to talk Tenma out of abandoning the robot Tobio, strongly advising Tenma that the robot is still his son.

Professor Ochanomizu pacing in his lab 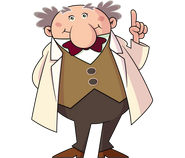